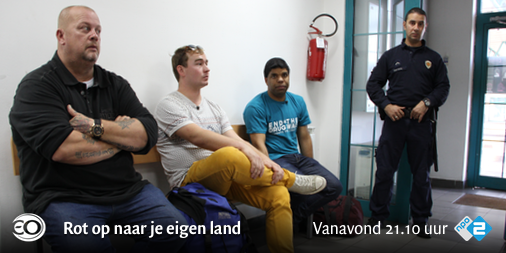 Click here to watch it. It’s in Dutch. My girlfriend showed me this. It’s pretty brilliant.

It’s a short documentary/reality series that was aired daily a couple of weeks ago. It follows six Dutch people as they experience first-hand the route and hardships an asylum seeker from the Middle East has to go through to enter the Netherlands, but then back-to-front.

Each of the participants has a different view on immigration and immigration policy and politics. While one wants to throw open the borders and let everyone in, another would rather “dump them all on a deserted island, put a dome over it, throw the key away and never look back”. They traverse from Holland through to Germany, Hungary, Greece, over the sea to Turkey, finally to Lebanon. Some of them are deeply moved, shocked, and some change their mind completely.

What’s incredibly fascinating is not only the subject matter, which sheds a clear light on the realities of the experiences of asylum seekers (though some would argue it’s exaggerated or biased), and thus thematically relevant to how international borders, as political walls, significantly affect humans.
It’s more so the medium that grabs me. It’s reality TV, a bit like Survivor and I’m a Celebrity Get Me Out Of Here, but without the manufactured drama and game elements. It’s a serious way to throw a handful of frankly unremarkable people (who’d never make it into Big Brother if only for their lack of “great TV” potential) into a life-changing, first-hand experience.

It’s sitting on a fine line between actually experiencing what it’s like to be an asylum seeker, and a simulation thereof. The participants could leave anytime they liked, and one actually did so right before they were to cross the sea from Lesbos to Turkey. Another was forced to fly home after getting an allergic reaction in Lebanon. So, maybe it’s a safer environment than if it would be an actual first-hand experience.

But is it life-changing? What interests me with interactive experiences is that I think it offers a pseudo-real exploration of the mechanics of a system, an issue, a problem. I expect the medium to be therefore, a very effective way to change peoples’ minds or at least to make them question and discuss an issue.

But seeing the results of this project, which was several steps above the medium I hope to use, I have mixed feelings.

One of the participants, the desert island one, completely changed her opinion, hit with a drastic emotional revelation. However, others stubbornly stuck with their opinions. All of them accepted the realities of human suffering, but distanced their emotions from their politics. Why? I have no idea, but it’s clear that my previous assumption that first-hand experiences are not always “life-changing”.

Back to the drawing board? No.

But I’m starting to be pretty sure that trying to make others see things as I see them is a bit futile and egotistical.

I’d rather have my audience experience something, and reach their own conclusions. With lots of discussion. Yes, that’s another thing this series did well. Not only did the participants discuss a lot, but viewers could join in on Twitter. Discussion’s important.