I spent last week trying to get back on my feet and trying to become interested and into my project and research again. I spent two weeks being sick and in hospital, so I missed quite a lot of time, but hopefully I can pick up the pieces and salvage it!

At least now I’ve made a gigantic leap forward! I’ve got a setting that works well and makes my creative appetite flourish. The setting was something that I’d been stuck on for about a month, so I’m glad that’s out of the way.

So this blog post is about explaining and exploring the world I’m moulding through which my project and research will take root.

Imagine a country very much like the Netherlands, but not the Netherlands.
There’s a small island several miles from the coast to the north. It’s inhabited by a small number of people, who have lived there all their lives, just as their forefathers have. A small collection of houses line the only street on the island, facing the harbour and beach. A lighthouse stands guard on a peninsula outside the village, where a lighthouse keeper earns his keep from the state. The rest of the Islanders are fishermen and housewives, with one shopkeeper and a ferry skipper.

The Islanders have always been isolated. Technologically backward, and quite conservative, but they like it that way. They’re proud of who they are, and their unique culture contrasts with that on the Mainland. The Islanders mistrust the Mainlanders; whether it’s because of the large trawlers fishing away their livelihood, the government always having ignored them, knowing that their opinion of them is that they’re inbred yokels. The Island was never even a part of the country before a hundred years ago.

The Islanders have very little in the way of food, apart from some homegrown vegetables and plenty of seafood. Everything else, especially fuel for heating and the boats, clothes, toilet paper,  other food, comes from the Mainland. Brought over by the ferry skipper who sails back and forth once a day (except on Sundays), and sold by the shopkeeper in his small shop on the waterfront. Their electricity comes from a wind turbine, with generators as backup. Although the Islanders can receive radio and TV, the few that use the internet need to travel to the Mainland.

And then, something terrible happened.

The Mainland flooded. The past decade there had been calls to strengthen the dykes to protect the country against the rising sea levels, but these had fallen either to deaf ears or halfhearted, disconcerted efforts. The ocean slowly rose to a sinister height, and when the raging, week-long storm came, the dykes with which the Mainlanders had so long conquered their lands with, gave way.

Soon, in a terrifying rush of nature’s fury, the sea encroached further and further into the country, drowning thousands, evacuating millions, and trapping many unfortunate people in their attics or on small pockets of higher land. Half of the country is now reclaimed by the sea.

Now, two weeks since the storm started, the government and all its assets try to evacuate and rescue as many as they can. The international community has sent aid. Even so, there’s no telling how many can be saved, and it seems unlikely that the waters would soon recede, if ever.

There’s an island to the north. Not the island we were talking about, but a much, much newer one. Now surrounded by the sea, a few hundred survivors take refuge on what was formerly a suburb of a city, built on a picturesque hill. All they can see is water around them, here and there buildings rising; church towers, flats. The survivors are out of luck, though. No helicopters have found them yet, and the food they managed to scavenge won’t last them long.

One night, a small yacht strands on this pocket of land. A small group of survivors, upon finding it, fix it up, stick some fuel into it, and decide to sail off in it. Perhaps to save their own skins, perhaps to find help, but most of all, to find a new refuge.

One old man, one of the survivors, used to be a sailor. He quickly takes the helm, and glancing at the yacht’s charts, sees an opportunity in a destination… 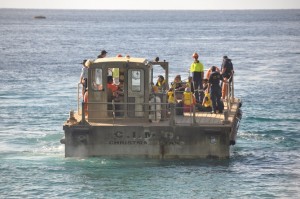 A few miles to the north, there’s an island. The Mainlanders all know that island. Isolated, backward, strange, but perhaps they can help. It´s near, it´s safe, it shouldn´t be flooded.

Cramped in the boat, they head for the Island.

Finally, some doodles, notes and ideas I’ve hung up on a wall: