So, here we go! The first post! Finally, after a couple of weeks of intensive scrambling for clarity and quite a bit of illness!

I want to put a lot of thoughts, ideas, things I’ve stumbled upon and everything I’ve researched and tried out. They’re probably going to be rambling, sometimes contradictory, sometimes a sentence, sometimes a tome. But the goal is to have a depository of my process in the last leg of graduating for the four-year-long adventure that has been Interactive Performance Design. Mostly for myself, partly for anyone who seems to be interested.

I think I’ll start off with a quick synopsis of what my project is all about.

I’m going to make an interactive theatre piece, where the audience collectively plays the lead role and through their own agency, explore and play with the mechanics and dynamics of political and social walls.

What do I mean by political and social walls, first of all? It’s a subject that has fascinated me for quite a long time now. An issue that I’m worried about and something that drives me to debate and discussion. I’m a very political person, having dabbled in a fair bit of anarchist and left-wing ideas, as well as their counterparts. I have a lot of strong, often stubbornly self-assured opinions, and revel at the opportunity to have a lovely talk about them with anyone who’s willing to be as stubborn as myself.

There’s going to be a lot of bias involved. I’m very opiniated and there’ll be posturing and assuming galore. As I find out more, there’ll be less of that, and at the end of it all my project is about letting people ask questions and conclude answers for themselves, not about pushing my own views down their throats.

But political and social walls? Well, let’s define it this way, though I’m most likely going to change the definition as I go:

We’ve got the Berlin Wall, the “peace walls” in Northern Ireland, the US-Mexico Border, the segregation wall in Bethlehem, Hadrian’s Wall and a large list to complement them.

All these, are of course, very physical walls. They keep people out, they protect each side from each other, sometimes just one side avails from this protection. They are often a reactionary solution to an already existing rift between two communities. The contrasts and conflicts of socialism and capitalism, unionism and nationalism, Palestine and Israel, barbarians and Romans, differing nationalities; they already existed before these walls were built.

Maybe I can argue that these physical walls of bricks, mortar and barbed wire are merely cementing the barriers that were already present in the status quo.

Are they symbolic for the figurative walls?

Do they solve or ameliorate the conflicts they symbolise?

Or do they make contrast them even more and simply stand for a constant reminder of these conflicts?

That makes me much more interested in what I think is the underlying theme:

Political and social walls which do not consist (solely) of bricks, mortar and barbed wire.

I hope you can see where I’m going with this, but rather than try to be all wordy and shit, here’s more examples. 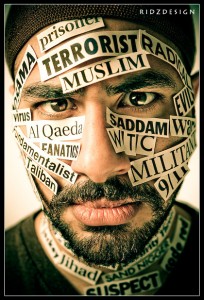 Allah and Allochtoon: Arabians as our newest international scapegoat. Where Jews and communists filled the role of convenient target practice in the last century, now it’s anyone with slightly darker skin from the Middle East and North Africa. Are we as natives of the western world erecting fortresses to stem what some claim to be a neverending tide of Muslim immigrants and refugees? Why? Why is it that, for example, Dutch newspapers are glad to mention a crime being committed by a “lightly tinted man”, but don’t bother describing the same crime as such when committed by a white Dutch man? How did the frankly unsettling rise of the new fascism in Europe get so out of hand? Maybe not the questions I should be asking as a white, left-wing European, but islamophobia is, I think, the biggest issue out there regarding social and political walls. They’re being built today, shored up with fear, and as such I think I can glean the mechanics of why and how people achieve this suspicion, hatred, and separation. 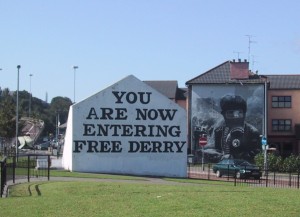 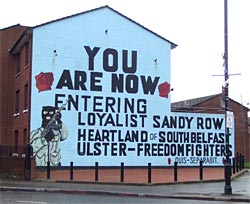 Proddy bastard or papist arse?
It’s a rare sight to see a protestant and a catholic hand-in-hand in many parts of Northern Ireland these days. Whether it’s green or orange, Paddy’s Day or the Marching Season, the Jack or the Tricolour, Irish or British, the recurring motif has always been “identity”. Nationalists and unionists have been at each others’ throats since god knows when; when they’re not fighting each other, it’s excluding the other from anything and everything. Northern Ireland is a place of two sides deriving their identity from elsewhere. You identify as British, or as Irish, thus there has never really been a “Northern Irish” identity, culture, and as such, it’s hard to say whether it has ever been a “nation”. What’s interesting to me in this case is not necessarily how the walls were built, but how so many people are now trying to break them. Interdemoninational education, the power of the internet and cultural globalisation, a new generation weary of their ancestors’ conflict, and countless initiatives to at least get the warring tribes talking to each other. Perhaps a new Northern Irish identity, one not borrowed from the Republic in the south or the Kingdom to the east, could be a solution? I’ll definitely be doing some more research into how these walls are eroding away, and try to identify the mechanics of, well, identity.

Contraband humans: the idea that by losing the nationality raffle, a person becomes less equal once they cross an arbitrary line. Yeah, yeah, I’m already setting a biased tone, but I’m talking about illegal immigration. History and culture is probably more defined by the movement of groups of people than wars and empires. Cultures evolve because of migration, emigration and you know, people moving from one place to the other (repetition to make a point). We wouldn’t have McDonald’s if it weren’t for some Germans making meat into shapes catching on in the United States. We wouldn’t have the United States if it weren’t for millions of Europeans going there to piss natives off.
But the fact is that we have countries, and countries have borders. Those borders are made less than arbitrary with walls, defined by fences, guns and/or pieces of paper.
Some countries are pretty fine, where you can live until you’re over 80 and you can probably earn enough to afford a barbeque grill. Some countries aren’t so nice, where you can probably die in childbirth and earn just enough to eat a grilled sausage once a year.
What happens when the people in the latter country really would like to live in the former country, and why the guys with the grills don’t want to share their burgers, is the interesting part.
Is it about putting our own people first, and protecting our jobs/welfare/pork chops?
Is it about treating one nationality more superior than another by labelling someone “illegal”?

There’s many more examples and ideas, but that’s it for now. I’ve got lots more posts lined up, I’ve got some interesting things I’ve found to show you, and I really want to talk about why and how I want to make something called “Interactive Theatre”. So bookmark this blog.